Since 1997, AEM has provided a high-quality lecture series hosted monthly that features presentations by prominent scholars from various countries across the world.

Medieval Armenia in Los Angeles: Manuscripts at the Getty Museum 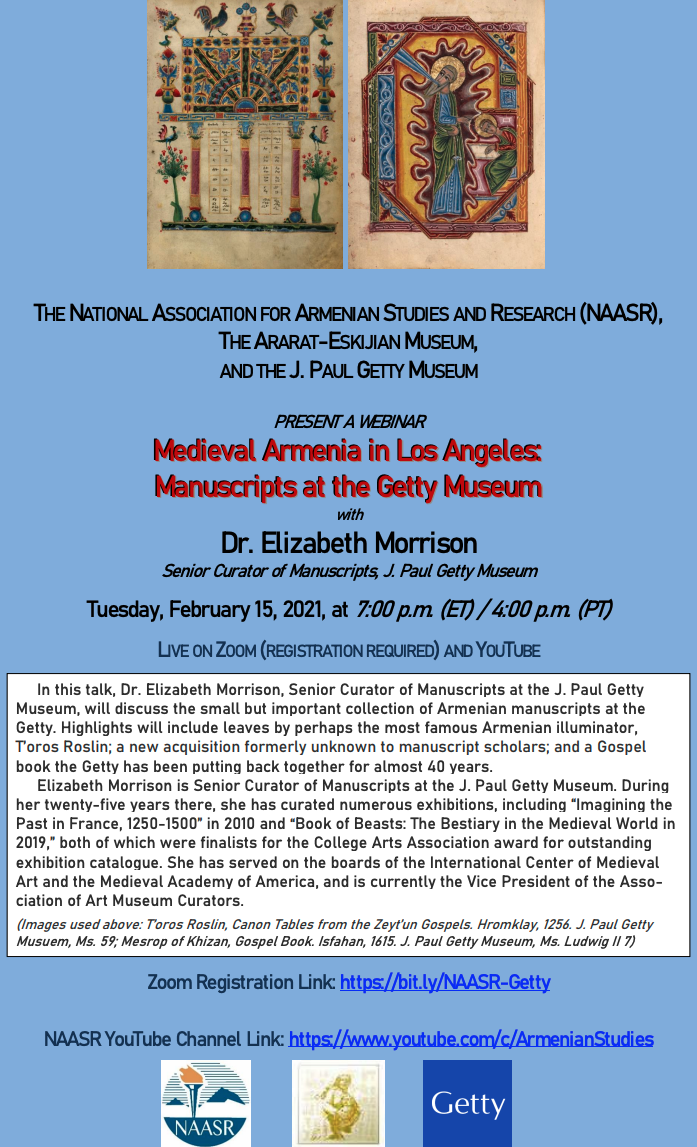 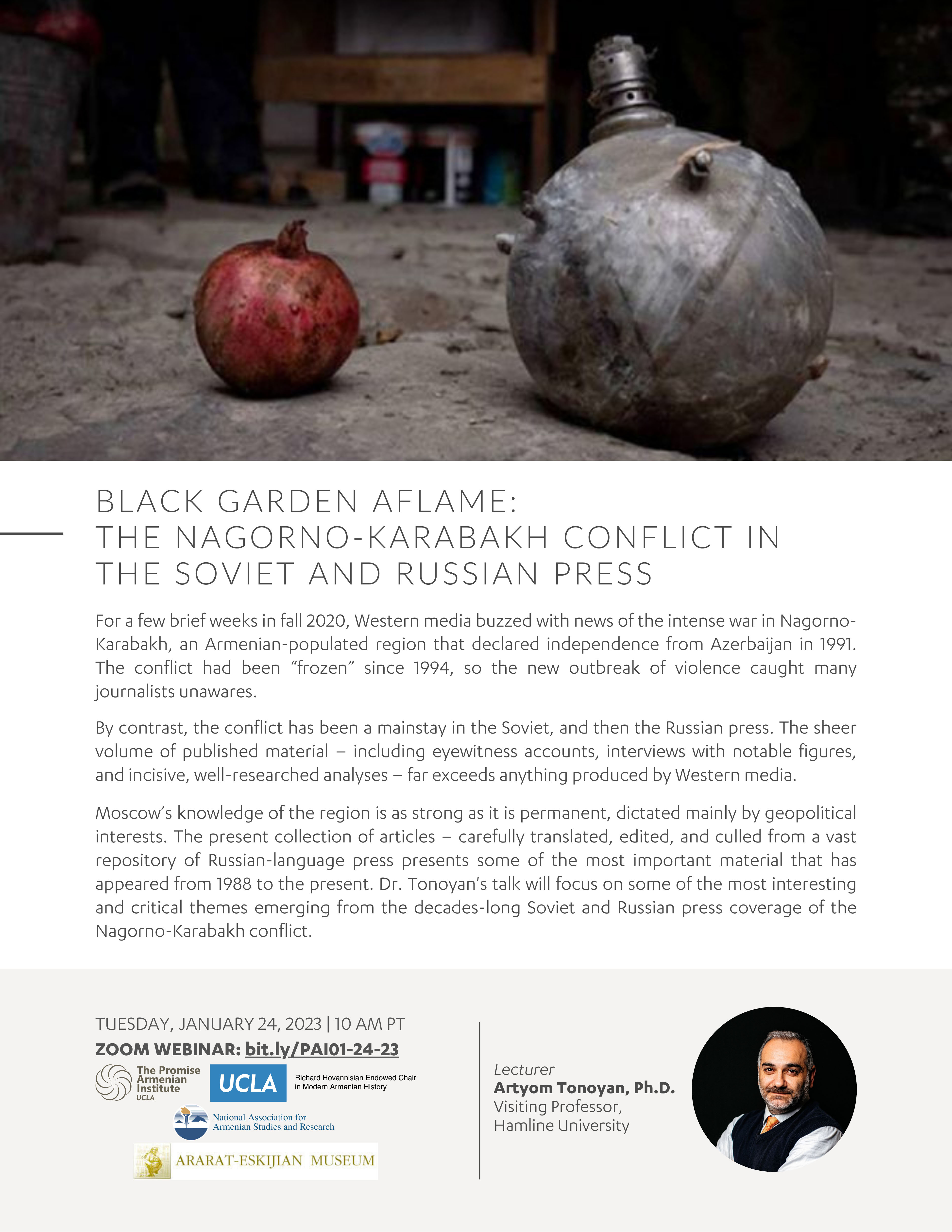 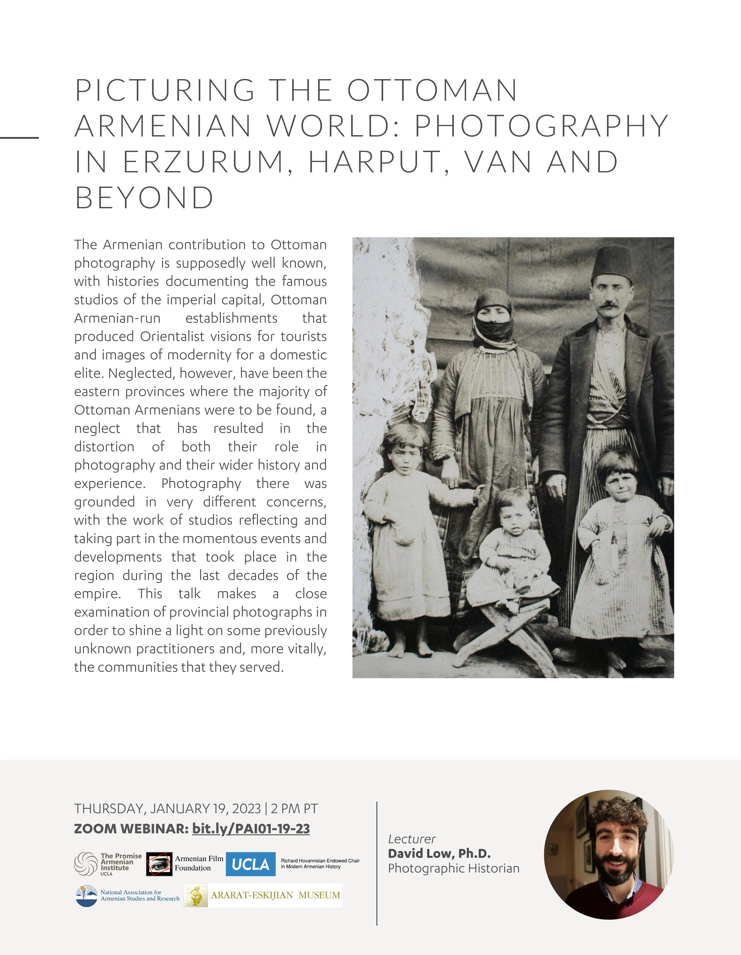 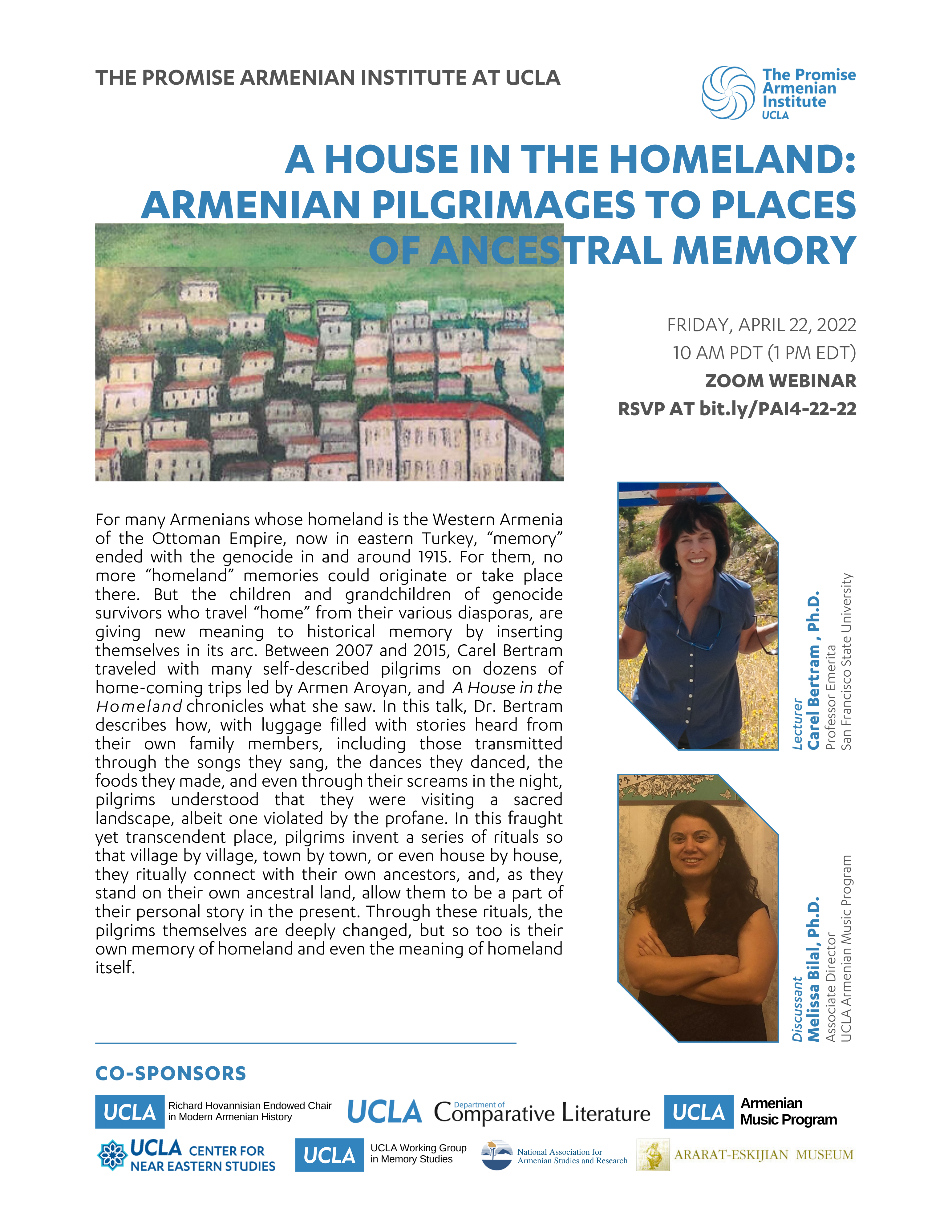 Below is a playlist from our YouTube channel of previously recorded lectures dating back to 2011. Press the playlist icon

to open the entire playlist.

→December 06, 2009
“The Discovery of a 6000-year-Old Cave Civilization in Armenia” by Dr. Gregory Areshian and Dr. Pavel Avetisyan

→November 29, 2009
A Special Evening in Memory of Dr. Vartkes Broussalian with a screening of “The River Ran Red” a film by Michael J. Hagopian Director and founder of Armenian Film Foundation

→November 08, 2009
A Historic Tribute to Veterans: Honoring Armenian Men and Women who have served in the American Armed Forces, with special guest from the Armed forces.

→October 18, 2009
“A Forgotten Genocide and The Century-Long Struggle for Justice by Michael Bobelian Journalist and lawyer

→May 31, 2009
“A Literary Romp with Writing Cousins Aris Janigian and Mark Arax” introducing their critically acclaimed books and a A Shindig at Ararat-Eskijian-Museum.

→April 26, 2009
“Journey Back in Time.. a Unique Picture of life during the Armenian Deportation and some history of why it happened” by Dr. Kay Mouradian

→February 22, 2009
“The archival Chamber of Etchmaidzin” by Dr. George Bournoutian

→November 16, 2008
“Daredevils of Sasun: The Poetic of the Armenian National Epic” by Prof. Azat Yeghiazaryan

→November 09, 2008
A Historic Tribute to Veterans Honoring Armenian men and Women who have served in the United States Armed Forces

→May 31, 2008
“The forty Days of Musa Dagh The True Story of a Film Denied” by Edward Minasian

→May 4, 2008
“The Rescue of Enslaved Armenian Women and children in Syria at the End of The World War I Genocide” by Dr. Vahram Shemmassian

→January 25, 2008
“A Commemoration of the First Anniversary of the Assassination of Hrant Dink” by Stephen Kurkjian and Taner Akcam

→December 02, 2007
“The Journey of a lifetime: Climbing Mount Ararat” by Dr. Ara Tekian

→March 04, 2007
“Armenian Pioneers and Statemen of Egypt” by Sona Zeitlian

→February 03, 2007
“A Knock at the Door: A Journey Through the Darkness of the Armenian Genocide” by Margaret Ajemian-Ahnert

→December 03, 2006
“A World of Transition: Armenians in the Ottoman Photographs Collection of the J. Paul Getty Museum” by Van Aroian

→January 15, 2006
“Reaching for my Roots Torosyan’s Journey” by Apo Torosyan

→April 09, 2005
A Tribute Banquet honoring Prof. Vahakn Dadrian for a Lifetime Achievement Under the auspices of The Armenian church of North America Western Diocese along with 12 community Organizations Introduction by Dr. Taner Akcam.

→December 12, 2004
“The Emigration of the Armenians to the United States of America: Evidence from the Archives of the Armenian Patriarchate of Constantinople” by Dr. Knarig Avakian

→March 28, 2004
“The Ambassador of Armenian Music to the World: Aram Khachaturian 100- Anniversary” A documentary film presentation of the life and music of a great composer during the soviet experiment. Executive producer Dora Servartian-Kuhn

→January 11, 2004
“A Journey through Armenian Time: The Armenian History Timeline” by Hagop and Marilyn Arshagouni.

→December 14, 2003
“The Armenian Bride Trousseau exhibition: with presentation in English by Seta Simonian on Armenian customs, anecdotes, songs related to the Armenian bride and her wedding”

→November 02, 2003
Tribute to the founder of the Ararat-Eskijian Museum Luther and Anne Eskijian and benefactor and chairman emeritus Mrs. Hasmik Mgrdichian.

→October 19, 2003
“The Armenian-American Experience in Writing and Literature” by Mark Arax and Aris Janigian

→May 18, 2003
“The Validity of the Armenian Claim to Karabagh” by Dr. George Bournoutian

→April 13, 2003
“Reflections on the Armenian Genocide” by Dr. Vahakn Dadrian

→October 19, 2002
“The Islamicized Armenian of Hemshin” by Hovann Simonian.

→April 2-30, 2002
“In Celebration of Life Armenian Identity and Culture of the Diaspora A student Art Exhibition” (Participants from various Armenian School in Southern California).

→May 11, 2001
Book signing “At the Crossroads of Der Zor: Death and Survival in Aleppo”by Hilmar Kaiser dinner and musical program

→May 02, 1999
“A Historic Tribute to Veterans: Honoring Armenian Men and Women who have served in the American Armed Forces.”

→October 25, 1998
Historic Memorial Service to honor to rest human bones recently recovered from the desert of Der Zor, Syria representing many Armenians who perished in the Genocide of 1915.